The method used by Proctoclinic is called “Total Hemorrhoidoplasty with Laser” and is the most modern and safe method that medical science and technology has to offer for this particular condition. (watch video)

After the use of ultrasound for more than a decade (1996-2008) with the well-known techniques HAL-RAR, THD, TRILOGY or HELP the use of modern laser and special optical fiber is the second major revolution in the treatment of hemorrhoids. 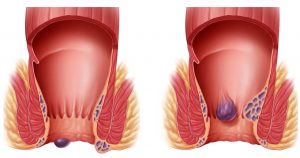 Hemorrhoids, as it is called, is not uncommon. On the contrary, it occurs in a very large percentage of the population. And it’s neglect, unfortunately, is also not uncommon. Many patients endure the bleeding and pain, perhaps fearing the complications of such an operation.

However, things have changed radically in recent years and the old techniques, such as surgical excision, have now been discontinued. While the use of the latter and by far better technique, which was ultrasound ablation, is also tending to die out because of the frequent recurrences it used to have and because it has been replaced by the truly revolutionary technique of using lasers.

Laser treatment has been applied to thousands of patients, evolving it and increasing the success rate, which now reaches 98%.

This advanced laser application is called “Total Laser Hemorrhoidoplasty” (Total LHP) and is exclusively applied by the Proctology Center “Proctoclinic”, being one of the most important developments in this long-term course of research and surgical practice of Dr. Alkiviadis Pappas.

Therefore, it is important for the patient to be aware that the choice of the way to treat hemorrhoidal disease does not depend on their degree, but solely on the surgical experience and medical expertise of the surgeon.

Laser hemorrhoidoplasty is a painless, minimally invasive method that takes less than 15 minutes and is performed under minimal anesthesia or intoxication. It is the only technique that directly intervenes in the hemorrhoidal mesh, causing its definitive shrinkage, without even minimally affecting the lining of the bowel and without leaving any post-operative scars within the anus.

It is the most advanced technique of the so-called painless ones (HAL-RAR or THD or TRILOGY), which minimizes complications and side effects, while at the same time eliminating recurrences. It is by far the safest treatment even in patients with blood clotting problems and it is done without stopping Anticoagulant medicines.

No hospitalization is required after the procedure and the patient returns home. The next day the patient can return to daily activities without any problems.

In this sense, do not hesitate to improve your quality of life by getting rid off problematic hemorrhoids. It is a matter of just a few minutes, done through a simple, bloodless and completely painless procedure that ensures you a definitive solution.

Total Laser Hemorrhoidectomy is a painless, minimally invasive procedure, that takes less than fifteen minutes and is performed under minimal anesthesia or intoxication. It is the only technique that intervenes directly in the hemorrhoidal plexus, causing its definitive shrinkage, without even minimally affecting the mucosa of the intestine and without leaving postoperative scars within the anus.