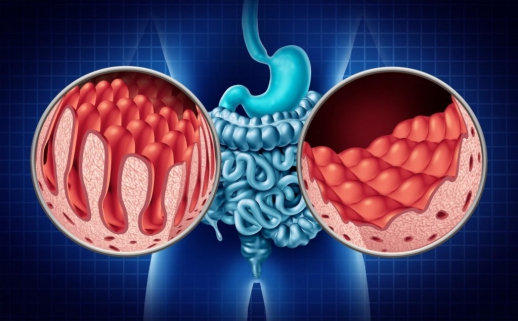 Celiac disease (gluten intolerance) is a relatively common small bowel disease caused by gluten consumption. Gluten is a type of protein found in cereals (wheat, oats, rye, etc.). When these foods are consumed by people with this particular intolerance, an immune response is triggered in the body, which in turn causes inflammation and damage to the small intestine.

This is a disease that mainly affects Europeans and the countries of America and Oceania, where the descendants of European immigrants make up a large proportion of the population. In the USA, for example, it is estimated that 1% of the population suffers from gluten intolerance, while in some European countries the figure is even higher.

It is still not known why some people develop this intolerance but it seems that there must be a genetic background for it.

Celiac disease is a serious disease which can cause serious symptoms, including malabsorption of essential nutrients. Generally, it affects each individual differently and symptoms and their intensity may vary.

The most common symptoms of celiac disease

The most common symptoms and signs of celiac disease are:

Is celiac disease dangerous for the life of the person?

In people who develop the disease, and if they continue to consume gluten, damage to the lining of the intestine occurs. The consequence of the destruction of the mucous membrane is the inability to digest food properly and the non-absorption of nutrients that are essential for the health of every human being. This results in chronic malnutrition of the individual and deficiencies of essential nutrients such as proteins and vitamins. Therefore, gluten intolerance is dangerous to human life and people suffering from it should avoid eating it.

There is only one cure for celiac disease and that is to remove gluten from the patient’s diet. Once the patient starts eating only gluten free foods (Gluten Free), the lining of the intestine will gradually begin to repair itself. Most people will see an immediate partial resolution of their symptoms, but it may take 1 to 2 years after removing gluten from the diet to fully repair the damage done to the gut.

Dietary fiber and the gut microbiome: the role of prebiotics, probiotics and metabiotic
Stress: How you can reduce it with simple daily changes
Chronic constipation: Is your gut trying to tell you something?
https://proctoclinic.gr/wp-content/uploads/koiliokaki-symptomata.jpg 635 1024 Proctoclinic Dr Alkiviadis Pappas https://proctoclinic.gr/wp-content/uploads/logo_338_x_100_glow_2.png Proctoclinic Dr Alkiviadis Pappas2021-11-04 08:00:232022-09-19 08:50:53Celiac disease: The gluten intolerance that is important to detect in time – See the most common symptoms